Some successful years in the pony divisions followed, but at the age of 14, Emile started riding the horses.

His first horse Gordon (Jasper x Marlando) was bred by the Tacken family and in his first year he already became champion of the beginner level in jumping horses. Two years later when Emile was 16 years old, he rode in his first European Championships. In total, Emile won seven medals in the European Championships, which is a great result from his junior and young-rider period. Winning the European individual title for young riders in Lisbon was one of the highlights in his career.

Already when Emile was 17 years old, the national coach sent him abroad to participate at international senior shows. At the age of 19 Emile was rode in his first World Cup qualifier in 's-Hertogenbosch. Other important victories in Emile's career were in the Grand Prix of The Hague (2001) and in Wiesbaden, Germany (2001). In Wiesbaden, Emile beat Hugo Simon, with one of world's best horses, E.T., in a fully packed stadium with his horse Miss Montana.

The latest important victory was in 2004. Emile became the Dutch National Champion with his mare Miss Montana. In this Championship Emile was leading the championships already in the first round. In four rounds he didn't lose this position.

In the last years Emile had good results with several International horses such as: Gordon, Revanche, Miss Montana, Jeola, Limminka, Stouten's Lemay and Minka's Diamond and many others. Click here for the results.

Emile is riding and training horses owned by him, others and those bred by his father and uncle. The most successful horse the Tacken family has bred, was Gordon (Jasper x Marlando). For many years Family Tacken is breeding horses. Emile's father always has attached much value to the importance of the quality of the mares besides the importance of the stallions. Whereby the character of the horses and willingness to work and corporate the main quality of the horse breeding is of Family Tacken.

For many years now Emile is riding for horse owners in Holland as well from Portugal, Canada and the USA. Kate Levy, from the USA, and Emile have developed a partnership selling quality hunters, equitation horses and show jumpers together. Kate is a very talented and successful American jumping rider.
In 1999, at the age of 18, Kate lead the USA in the Pan-American Games Show Jumping Selection Trials. With her top horse Lagretto 5. Since, Kate has consistently produced good results in Grand Prix events around the world. In 2001 she participated at the World Cup Finals in Gothenburg, Sweden, having won two consecutive World Cup qualifiers earlier in the year, one at The Autumn Classic Show in New York, and the other one week later at the Gold Cup in Pennsylvania.

Emile and Kate have developed a relationship that works well, often investing in horses together, or matching a specific horse with the right client. Basing in Holland enables Emile to search for top quality horses, buy and begin developing them, or just follow the progression and results of particular horses that strike him as top jumpers, equitation horses or hunters.
Kate, based in the U.S., is familiar with the American market, and is also very knowledgeable on hunters and equitation horses, divisions that do not exist in Europe; therefore, she is able to match these horses with the right clients or import them in order to continue their progress in the American system. Depending on what Emile and Kate decide to be the best path for each specific horse, they sometimes send their horses to continue their training and get sold in the U.S. with Kate, or they keep some in Holland with Emile to be sold or imported at another time.
In any case, one is sure to find a top-quality horse for himself in either of the locations. 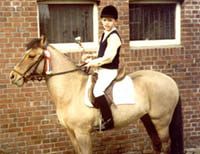 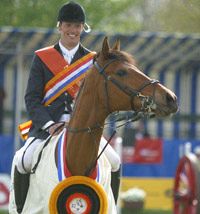